The P Trap was developed as part of the drainage system for the plumbing in your home or business. The P trap will also stop sewer odors from coming back up the drain and into your bathroom. This trap has been used all of the world for many years and will continue to be.The p-trap is found in the bathroom, the kitchen, the basement, the bar and many other places in your home.Many P-trap’s can also be found in many commercial places of business. P-Traps can be found in fast food places, supermarkets, schools,hospitals, zoos, office buildings, outdoor showers at the beach and pretty much every where you can find a fixture drain. 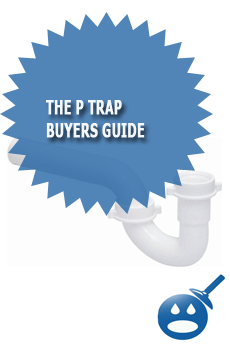 If your bathroom is built on a slap you will not be able to see your p trap because it will be “inside of the slab”, which is under the bathtub or the shower pan. If you have a bathroom that is built on the first floor and you have a crawl space or a basement you will be able to see your p-trap if you go into one of those areas. The only problem you may run into is if your basement is finished, you may have to remove some Sheetrock from the basement ceiling before you can access the p-trap and the bathtub trip lever or shower pan drain.

Different Styles Of The P Trap:

If you need to install a new fixture or possibly replace an existing p-trap, you will need to know that there is a difference when it comes to buying a p-trap. There are two different mechanical styles of the p-trap as well as a few choices of material that some p traps are made from. 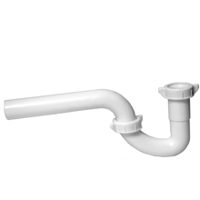 For example, P-traps are made from PVC, Brass, Steel, and sometimes even a rubber replacement can be found in places like Home Depot, Lowes, or a local hardware store. Depending on where, and what type of fixture you are installing or repairing will determine what type of p-trap you will need to replace. In most cases the local plumbing code will tell you what type of trap should be used in the area you are working in.

These plumbing codes will also vary from state to state. So if you know a professional plumber in another state and they tell you what they use it may not be what your state requires. It is also very important to remember that just because a certain type of p-trap is install, that doesn’t mean that type is supposed to be there. In fact when many people “ticker” with there plumbing they just grab the first thing that fits and works and it gets left, they sell the house and someone else moves in, they experience problems with the trap not because its the trap, but it very well could be because of the wrong trap that was used. This is why it is very important to replace your p-trap with the proper type and style.

The PVC P-trap can be found in many newer homes as well as many commercial buildings. There are some advantages to the PVC P-trap like less corrosion and longer life of the p-trap fitting in the right environments. The PVC P-Trap comes in many sizes and a few different styles. The most common sizes of the p-traps that are used in homes are 1.5″ and 2″ traps. 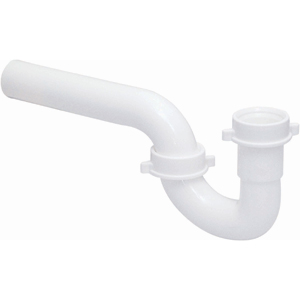 Most states require the washing machine, or the washing machine p-trap to be at least 2″ inches in size for proper draining. Most states will also require something called a “soap stack” as well that should be glued to the p-trap. If you go into the bathroom and look under your bathroom faucet you will see the common 1.5″ P-trap, now walk into the kitchen and you will find another 1.5″ or 2″ p-trap depending on your states or local county’s plumbing code.

There are two different types of PVC P-Traps to choose from when you are ready to repair or replace your trap. The names of the two different types of p traps are the “swing joint p trap” and the “glue p trap”. Both kinds of these p-traps let the water flow the same way but they are different when it comes to installing them. The first type of p-trap we will talk about is the “swing joint p-trap”. This type of p-trap is very standard in many plumbing installations because of it’s ability to be serviced after installed, and in fact in most areas, the swing joint p-trap is required by the plumbing code.

The swing joint p trap which is sometimes if referred to as the tubular p trap has nuts and washers where the two parts of the trap connect to each other allowing the trap to “swing” from side to side. This is handy when installing a new sink or replacing an existing p trap. The second type of p-trap is called the “glue p trap”. The glue trap is exactly what it sounds like. It is a PVC p-trap that gets assembled and installed with glue. This type of trap is more commonly used in area where there will be no access to the trap such as shower pans and tubs that are roughed on the slabs. Unlike the swing joint or tubular p trap, this type of trap is permanently in place once the glue is applied and can not be taken apart if the trap need to be serviced. 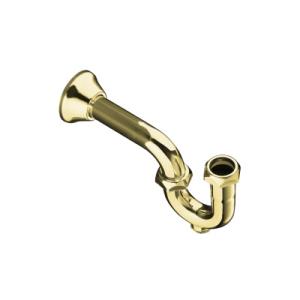 Besides the PVC p-trap there are of course other things that a p-trap can be made from. Another common material used is brass. Brass comes in two different types of styles when it comes to plumbing and p-traps. There are “rough brass p-traps” and there are also “polished brass p-traps”. There is a major difference however between these two types of traps and coatings. The Rough Brass P Trap is exactly what is sounds like. Its a rough unfinished brass that is dull and boring but every effective in areas where the trap is not to be seen or noticed. This type of trap is often used in commercial bathrooms and sometimes even bathrooms in the ordinary home if there is a vanity.

The Polished Brass P Trap is something a bit nicer then the standard rough brass p trap. The “polished brass p-trap” is nice and shiny and polished to look as if it was chrome. This type and style of p-trap is often used in areas where the p-trap is fully visible, for example a pedestal sink. The polished brass p trap is also more expensive then the standard rough brass trap. When you also start working with polished brass materials you need to be very careful when using tools so you do not scratch or chip the polished finish.

How To Install The P Trap:

2) Once the trap arm is installed inside the trap adapt you can now hook on the U part(the trap) of your trap by tightening the nut on the trap arm to the U joint.

3) You should now have the trap arm in the wall and the U joint or the trap as its called assembled. Once you have both of those done you now should hook your drain tail piece into the top of the trap.

5) Once all of the P-Trap is connected and tighten you will want to fill the sink or the fixture up all the way and check for leaks. If you see no leaks then you have done a good job. If you have read this and feel that it is something that you can not do, then you should call a licensed plumber to repair or replace the p-trap for you.

Common Questions & Answers About The P-Trap:

Question:
I dropped something down my sink, will it be in my p trap?

Sometimes, It depends how much water is running down the sink at the time and the size of the item, If the item is really important or valuable its best to call a plumber right away!

Question:
Can A Plumber Install The P Trap?

The Professional plumber can be called to install your p-trap, in fact the plumber works with p-trap’s all day long and this is an easy task for the plumber.

Question:
Can I Install My P Trap?

You can install your own p-trap if you are some what knowledgeable with hand tools and a bit with plumbing. Replacing a p-trap is not the hardest thing to do, but it can require a few tools and some strength as well. Sometimes its just best to call a local professional plumber if you feel you can not change the p trap yourself.

Question:
Is It Hard To Install A P Trap?

Answer:
Installing the P-trap is not hard or easy per say but will require a bit of skill like we just talked about above as well a a few hand tools. It will also take a while to change or replace if you have never done it before. If you are in a rush or short for time, your better off calling a professional.

Question:
What Tools Do I Need For The P Trap Installation or Repair?

Answer:
To Remove and take apart most p-traps you will need just a few basic hand tools. You will need a set of channel lock pliers and some pipe dope. If you can not loosen parts of your trap with those tools, its best to call a professional plumber because the threads on the p-trap cound be frozen and then you might break something trying to remove the trap nut.