When drain plugs are broken inside of the super pump housing they can cause the pump to suck air. If you need to replace the entire Hayward Super Pump housing it can cost you $120+ just for the pump housing then you will either have to do the labor yourself or pay a pump shop. 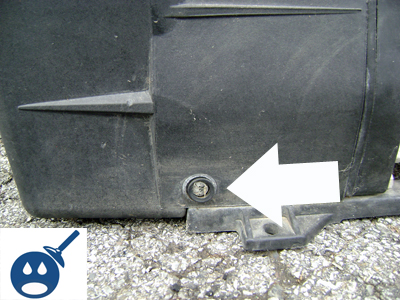 So removing the drain plugs with a few tools is a way to save money on your Hayward pump repair. Just so you know a new Hayward Super Pump can run between $300 – $500 dollars depending on the horsepower and model of the pump. So it’s much more practical in my book to repair the pump then to just replace it. Now, let’s talk about the tools you will need to get the broken plug out of the pump housing.

You will need a Flathead screwdriver and a hammer to remove the broken drain plug from the pump housing. You will want to be careful when removing the drain plugs so you do not destroy the inner threads. So when using the hammer as I describe in the next step, remember that there are threads that can be damaged if you get to out of control or are not careful when removing the broken drain plug.

Once you have removed the old plug you will want to replace it with a new one. Make sure to replace the plug with the right kind. There are two different styles of Hayward Drain Plugs. Some are tapered and some have rubber washers on them to make the seal.

If you have any other questions or need additional help fixing your Hayward Super Pump you can leave a comment below and I will try to help you with your problem. Always be sure to wear safety goggles when working with tools.