A toilet flushing slowly can be caused by either the water coming into the bowl too slowly or leaving the bowl too slowly. Basically either the incoming or, outgoing internal passages of the toilet would have a partial obstruction slowing the flow causing the bad flush or, a problem exists in the tank causing a lower volume of water available for the flush.

I would start by checking in the tank of the toilet to make sure the water level is set properly either to the water line on the tank or, overflow tube or, if no lines are marked 5/8″ below the top of the overflow tube and adjust the fill valve if the water level is not correct. I would also check flushing several times to make sure the flapper is closing consistently at the same tank water level when flushing and replace the flapper if inconsistencies are observed. Also observe the bowl refill tube to make sure that the bowl is refilling to the proper level and a bad fill valve isn’t just spraying water into the tank that should be refilling the bowl.

If in tank bowl cleaners were being used I would remove them from the tank and throw then away. There is one type where the cleaner sits loose in the tank almost in the form of a blue sludge. This type is particularly bad and in many cases has been the cause of a slow flush. Other times it has gone into the flush valve in sufficient quantities to block the internal passages and ruin a toilet causing the toilet to be replaced.

I would then check the bowl trapway to make sure it is clear by using a drop head toilet auger to see if there are any foreign objects lodged in the trapway. The drop head auger has a fairly wide head and a hook that can often retrieve objects from the trapway. If the drop head passes through you can be reasonably sure that the trapway is open but not 100% sure.

The next thing I would do is push a piece of coat hanger wire into each of the holes under the rim of the toilet inside the bowl. Often these holes become blocked with minerals after years of use and the blocked holes slow the water coming into the bowl. Also at the bottom of many bowls in the front is a hole about 3/4″ diameter where water should come in when the toilet is flushed. This is called the siphon jet and directs a blast of water across the bowl aimed at the outlet. This should also be cleaned and checked as the bowl empties during a flush to make sure it has good water flow.

Once the toilet has had all these checks and adjustments made it should be flushing properly again. Test flush the toilet and see if you have been successful. If the toilet is not flushing better a final test would be to take a pail and fill it with the amount of water the toilet requires to flush then rapidly pour the water into the bowl and see how well it flushes. If the toilet flushes well with the water from the bucket then you know the trapway is clear and you should focus additional efforts on the tank and water passages from the tank to the bowl. If the toilet does not flush well with the bucket then you should concentrate on the trapway for a possible obstruction possibly removing the toilet to check from the other end. If you have exhausted all possibilities and the toilet still is not flushing well I would consider purchasing a new toilet.

How I (Johnny) Replace The Toilet Flush Handle 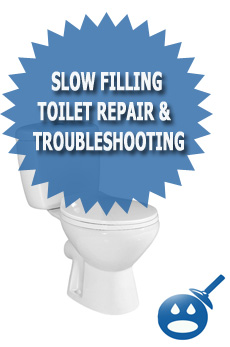 « Unclog Your Tub: $5.99 + Walmart
Did You Have Trouble Replacing Your Moen Cartridge? »