How To Vacuum Out An In-Ground Pool

Vacuuming out an in ground pool should be done at least on a weekly basis to keep the pool clean and the water healthy. It will take you about an hour depending on the size of the pool. In preparation for cleaning the pool you will need a pool skimmer net, a pool brush, and a pool vacuum and hose. 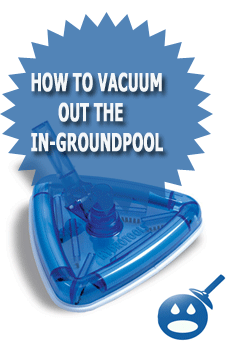 The handles on the cleaning equipment should be the telescoping type and be able to reach the center of the pool without you having to lean out over the water. I store my pool vacuum with the hose attached because I feel it makes the connector on the end of the hose last longer but if you have trouble carrying the vacuum and hose together you can break the vacuum down. I start cleaning the pool by using the pool skimmer net to scoop and floating debris out of the pool.

It’s surprising how many things land in the pool, dead bugs, leaves and who knows what may be blown in or, left behind the pool is a magnet for debris. Keep an eye on whoever cuts your grass and make sure they aren’t contributing to the problem by directing the discharge from the mower towards the pool or, using leaf blowers directing things towards the pool. Selecting a fence that will block some of the blowing debris will also help keep the debris in check. 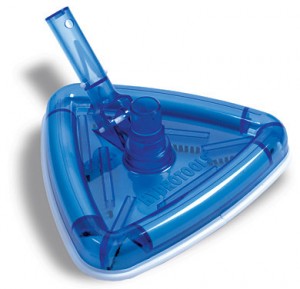 I then use the pool brush to brush down the sides of the pool and the slope at the bottom of the wall. This is important because even though it may not seem dirty with actual dirt like the bottom there is a bacterial film that starts to build up on the sides. If left uncleaned the film will eventually grow to where it can be seen and the water quality in the pool will suffer.

After skimming and brushing it is time for the vacuuming. On some pools there may be valves that you can change the position on to shut off water intakes that are not being used by the vacuum to allow greater suction and on others you may have to put in plugs to block them. You will have to know how to make the changes to get your filter ready for vacuuming. You will then need to open the access cover for the skimmer that you use for vacuuming. Sometimes the plastic access covers for the skimmer can be difficult to open when they have been baking in the hot sun but splashing some water out of the pool onto the access cover will rapidly cool the plastic cover shrinking it to where the cover is easy to remove.

Filling the pool vacuum hose with water is essential and if too much air remains in the hose the pump can loose prime and require repriming. To fill the hose I recommend placing the vacuum head on the pool bottom then pushing the hose straight down into the water starting where it comes out of the water at the vacuum end until you have pushed all of the hose under water all the way back to the attachment end. The hose will float back up after being filled but as long as you have started at the vacuum end and finished at the attachment end in one continuous filling the hose will be full of water. I then cover the end with my hand similar to the finger over the end of a straw trick and rapidly get it under water again in the skimmer that is being used for vacuuming and then remove my hand and place it down over the skimmer basket where the vacuum will hold it in place. Some people think that placing the end of the hose against one of the discharges will fill the hose faster but often the flow is not enough to push out all the air, which will cause problems. Even after filling the hose properly you will probably get some air into the system and after flowing for a few minutes I like to go to the filter and bleed the air out of the filter to increase the suction and filtration area available in the filter.

If there is a shallow end I like to start there and work my way to the deep end. Working the vacuum slowly across the bottom is key to doing a good job. If you go too fast you will only stir up the stuff on the bottom into the water without sucking it all up in the vacuum. I also start at the shallow end of the pool pushing towards the deep end so that anything that does stir up into the water may settle again in the deep end of the pool before you get there with the vacuum. I carefully vacuum in long slow strokes making sure that I don’t miss any spots. After going as far as I can from the shallow end I switch to the side, and make my way to the deep end. After finishing the side I go to the other side and pick up at the shallow end where I left off. I have found that using polarized sunglasses while vacuuming can help you see the bottom of the pool better because they cut the glare from the surface of the water. This can help you do a better job while reducing the strain on your eyes.

After completing the vacuuming I let it run for a few minutes longer to make sure the hose is clear of any dirt then remove the vacuum hose from the connection at the skimmer. I clean out the skimmer basket(s), remove any plugs that were needed and put any valves that were closed back into the regular filtering positions. I also clean the basket strainer on the pump and again bled the air then check the gauge on the filter to see if it needs cleaning or backwashing. Frequently the vacuuming will push the filter to the limit and when vacuuming a pool at the start up of the pool season you may have to clean the filter multiple times when vacuuming.