There are some advantages of using natural gas at house appliance fuel source, due to its highly efficiency and less pollution concern. However, if there is a problem found with home appliances that one uses every day, it is not simple thing to ignore and try DIY diagnose because of its high possibility of becoming worse, uncontrollable situation once the leak happens.

For example, in ordinary American home, gas oven’s broiler flame size is becoming erratic and it keeps increasing or decreasing. This unstable flame is an indication of some faulty appliance parts due to an age, or irregular supply of gas flow at one some points along the pipeline. Of there are times even after the gas regulator replacement or with new installation, there is no gas entering the gas range/oven.

Among the several possible factors, one can consider gas pressure regulator as the main source of the issue and focus on what could have gone wrong at the time of installation – whether it was a new or replacement of old unit. 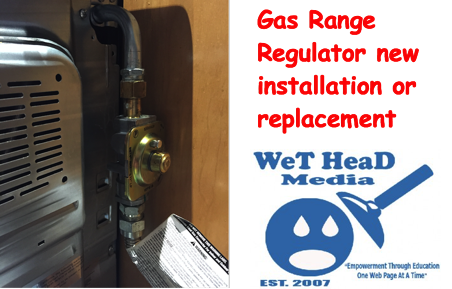 1. Wrong arrow position – there is an arrow on the regulator body indicating which direction the incoming gas flow should be. Gas should flow through the regulator the same direction as the arrow, meaning it must go towards the gas range. If installed in wrong direction, it could cause an overpressure situation and eventually damage the regulator. Always refer to the appliance installation manual with clear diagram.

2. Location of pressure regulator – you need to watch out whether it is installed on the intake manifold of the gas range or on the gas supply pipe where the gas shutoff valve is already installed. If the latter case, one would have to use the connection hose between regulator and the intake manifold and it is not recommended method. Install the regulator directly to the appliance’s manifold pipe that is located on either top or bottom of the back panel. The regulator position of whether horizontal or vertical is not important, and either one will be acceptable as long as it is securely tightened with correct arrow direction.

3. Verify if there is another regulator that gas company provided. Usually this is located either in the basement or outside the house where the gas meter is located. The houseline gas pressure is regulated at the entrance point, and normally the higher pressure is noticed at the stove line as compared to other places. In case the gas company set the higher pressured gas to be allowed into the house, there is a potential lock up situation at the gas range regulator, not to mention other appliances. You can ask the gas company to come over and check the pressure level on both regulators.

If none of above is identified as a possible cause of an issue, then it is best to call the licensed plumber who can handle this for you. Do not follow generic guideline as it is only intended for general informational purpose, not for the actual instruction to be followed.