How I (Johnny) Repair A Mansfield Flush Valve

Repairing a Mansfield flush valve is a simple task that many people have a lot of difficulty with because the Mansfield flush valve design is so different from what they are used to seeing in a toilet. Identifying the problem isn’t hard the worn out seal on the Mansfield toilet has the same symptoms as a leaking flapper. The tank refills again and again even without the toilet being flushed, this is what us plumbers call a “Ghost Flush” and it can waste large amounts of water with 200 gallons a day being possible. 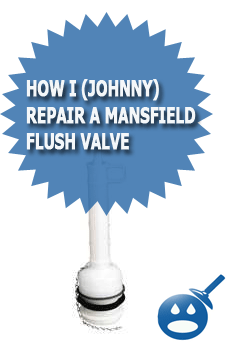 Some of the aftermarket knockoffs just flat out leak as bad as the worn out original parts so my advice is stick to the Genuine Mansfield OEM Parts. One of the two seals used is a black seal that attaches to the section of the flush valve that rises when you flush the toilet. At the bottom of the flush valve part that rises there is a bell shaped bottom and the black rubber seal snaps over the end of the bell. 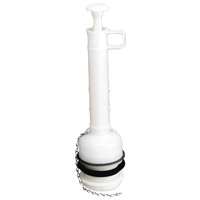 Once you have the seal you need and are ready to do the work the first step is to shut off the water supply to the toilet fill valve, this can be done at the angle stop valve which should be located below the toilet tank on the left side. Follow the supply line to the stop valve and shut it off. Remove the tank lid and place it on the floor so it can’t fall and break, toilet tank lids can be hard to find and quite expensive to replace. On the top of the flush tower there is a tube, which goes over to the fill valve or, ballcock as we plumbers call them. Pull the tube up out of the flush tower then unscrew the flush valve stop off the top of the flush tower. The stop is the part the tube was plugged into.

Once the stop has been removed the flush valve will come apart and you can access either of the two seals that were used. The black style seal snaps on and off almost like a Tupperware lid and the center of it requires a little guidance to fit over the tube in the center of the valve. The red seal is a little more difficult because you will be working inside the toilet tank and the old seal is removed by pulling on it to stretch it and pull it out of a groove. Make sure that you see the groove it comes out of and put the new seal into the same groove. I like to rotate the red seal in the groove to make sure it is seated properly in the groove. Once the seal is in place put the flush valve back together turn the water back on and test it for proper operation. Replace the tank lid and you are finished.