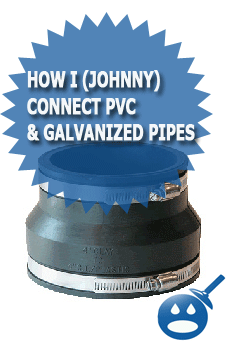 Connecting PVC to galvanized using threads is a weak connection. While screwing a male threaded adapter into a female threaded galvanized connection isn’t the end of the world and will probably work fine being just a little on the weak side the opposite way is pretty bad. Screwing a coupling onto the male galvanized threads will give you a female thread that a male PVC adapter could thread into.

Many handyman types opt to make connections using a rubber coupling such as those made by Fernco. These couplings are made of thick rubber and secure to a pipe using a hose clamp to tighten down on the pipe. A few different companies make these Fernco type connectors, but Fernco is probably the most popular and is often what is asked for at the supply house counter. These couplings are also available as elbows, tees, and wyes but none of these should be used. They are very weak flexible connections that will often end up kinked or, misaligned causing clogs to form. When the line clogs and you call a company to snake the line where do you think the blade on the end of the snake will go other than right through the side of that tee, or elbow? Hide the connection in a ceiling and you’ll have a leaking mess that the drain cleaner says is not his problem. And really it isn’t his problem that you have deficient pipes that do not meet the code.

The best possible connection interestingly enough is still a Fernco but not the same type we discussed above. Fernco also makes a Shielded or, Banded coupling which has a stainless steel band wrapped around a thin rubber coupling. This type coupling is what should be used to make the connection as the band offers support, which keeps the pipes in alignment and are not available in the unapproved styles of elbows, tee’s, and wyes. If the pipe should clog a snake would pass through the connection without any problems. Look for Fernco Proflex, Fernco Strongback RC, or, Fernco RC couplings to make your connection.