What NOT to do while Protecting your Home Garden from Animals

Rat traps and other such contraptions are inhumane even if they permanently get rid of animals that keep uprooting your prize potatoes. Can you really blame a hungry forest creature from sizing up your garden and sampling (or gorging on) a few roots or tubers? Some well meaning gardeners would prefer working with Mother Nature and not against it. So how do you protect your crop from the little critters that go bump in the night without having to hurt a feather or hair? 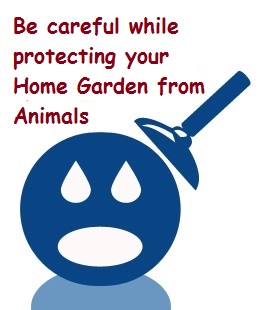 A little strategy goes a long way. Knowing what will discourage an animal from stepping foot into your crop field will prevent them and your garden from being harmed –

Birds are chicken. No, really. This is why they will flutter away at the tiniest of provocations. Even bright colors startle them. Take advantage of their survival instinct and place objects near or on your crop. This will make the pests think twice about pecking around your garden.

A scarecrow would be overkill in a small urban garden especially since it might actually end up blocking the sunlight that your plants sorely need. Instead a replica of a predatory bird, like an owl, will do. There is a reason they are called “bird brains” after all. Scraps of colorful fabric that flap in the wind or holographic CDs will also keep them away. The latter reflects sunlight which makes it a particularly effective deterrent.
You can also use light netting over your crops. However such an obstruction will make it inconvenient for you to tend to your garden.

The fake predator tactic also works on mice. If you are like most urban gardeners, chances are that you have had your fair share of rodent problems. Think about their natural predators. If you have a cat that is shedding sprinkle some its fur around your vegetables.

Experts also recommend sprinkling fox urine near the garden. This doesn’t mean that you trek through the woods cup in hand and stalk a fox until it has to answer the call of nature. You can purchase a can of fox urine from a landscaping service. The mice will have a hard time figuring out whether it is food that awaits them or an agonizing death. Again, survival instincts are likely to prevail here as well which means that the mice will probably turn tail and decide to forage elsewhere.

They might look cuddly but that cute demeanor hides a gardener’s nightmare. Rabbits can go through a crop plantation faster than you think especially since their raids involve chomping on some of this, nibbling on some of that and flinging rejects everywhere.

Even fences do not hold against these furry raiders since all it takes for them to access your garden is a quick burrow underneath. Some dried blood, cotton balls that have been soaked with fox urine and even human hair sprinkled around your garden can prevent rabbits from stepping paw inside your garden.

You can also sprinkle some chili powder around your crop especially if you are growing something that rabbits particularly love to munch on like clover or carrots. This is a less messy, not to mention less smelly, prospect anyway.
You can also raise your garden on elevated plant beds to keep them away from land pests. This might leave you to contend with feathered pests, however, the latter are easier to get rid of since they scare easy. Therefore the next time you plant always remember that using deterrents that play havoc with an animal’s survival instincts and make them stay away are more humane than traps that kill them in the most painful way imaginable.