Van Jones On A Mission to Create Green Jobs

Van Jones On A Mission to Create Green Jobs

When President Barack Obama was elected President he was very vocal about starting a Green Energy Plan, this plan included a way to pass a plan that included doubling his administration efforts to create an alternative energy product and to start work on new electricity based Smart Grid. 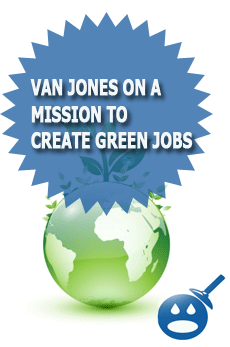 In this plan he wanted to modernize 75 % of all federal buildings and create a new and improved way to effectively and efficiently improve the energy of over 2 million homes. The goal is to save Americans billions of dollars on their energy bills.

Then on March 10, 2009, the White House announced that Van Jones would be the Special Advisor for Green Jobs. His other duties would be to advise and oversee the Enterprise and Innovation at the White House Council on Environmental Quality. Van Jones main responsibility as this new Energy Czar as some have called it, is to work with all of the other government agencies to ensure that the $ 30 billion dollars that is allocated from the stimulus package gets earmarked for the green jobs as it is intended to do.

Van Jones was born in 1968 in Jackson, Tennessee. Van and his twin sister Angela grew up with their Mother who was a high school teacher and his father was a local junior high school principal. In 1986 he graduated from the Jackson Central Merry High School and earned his B.A from the University of Tennessee at Martin and later he went on to graduate from the prestigious Yale Law School in 1993.

Van began his social and environmental activism career while he was still in College. At the time of the Rodney King Trial he was a volunteer as a legal monitor during the protests after the verdict was read. Van began to see things change he wondered why students at Yale could talk and do drugs openly and nothing would happen to them but growing up he saw the same things on the streets where he grew up and kids were arrested. In 1995, he started the Bay Area PoliceWatch and the Ella Baker Center for Human Rights.

The Green Collar Economy is a book written by Van Jones that was released in October 2008. He was inspired to write it after attending former President Bill Clinton’s Global Initiative. The book was received well by former Vice President Al Gore, Laurie David, Nancy Pelosi and Winona LaDuke. At the time of the writing Van Jones was not as high profile as he is today. He did not have any national media platform so his book relied on viral marketing on the web. The book debuted # 12 on the New York Times bestseller list, which is a great accomplishment.

Van Jones is a big believer in finding Green Ways to help make America run a bit better on cleaner and greener energy. Jones started the organization called Green For All. This organization was set up to work towards creating a green economy and to help poverty stricken families rise above it. The group’s mission is to improve the lives of all Americans and not just the poverty stricken Americans. This organization will work in conjunction with businesses, labor, grassroots and government agencies to create jobs and set up effective programs all dedicated to the Green Industry.

This stimulus package or otherwise known as the American Recovery and Reinvestment Act has included a $60 million allotment that will be used towards clean energy. In this section of the stimulus package, $ 11 billion dollars would be used towards creating a bigger and smarter grid that will be able to move renewable energy from the country or rural American cities to the bigger cities as well. This allotment includes for $ 40 million new meters to be installed in American Homes.

Van Jones would be overseeing the $600 million dollars in Green Job Training programs. $100 million would be used to expand the line worker training programs and $ 500 million would be used to increase the Green Workforce Training. In addition, Jones would be responsible for making sure that the $ 4.5 billion goes to make federal buildings more green and to oversee the reduction of the country’s energy bills which will lead to Americans saving billions of dollars in energy costs.

Acting as a special advisor to the Council on Environmental Quality is Van Jones. This concept is to create and promote the improvement of environmental quality. These standards would meet the needs of conservation, economic, health and other requirements that the country need to operate. According to the Vice President of the United States, Joe Biden, Green Jobs a way to help the middle class of America. The reason why green jobs could help the economy is that they have been said to pay about 10% to 20% more than other types of jobs. These Green Jobs are more than likely to be union jobs, which could mean more job security. The job of Van Jones is to help create green jobs and a green job is when products and services used as renewable energy resources, they will reduce the amount of pollution in the air and these jobs will conserve energy and save national resources.

Jones attended a conference held in San Francisco with House Speaker Nancy Pelosi. At this conference he was to help make a case for the National Clean Energy Job Bill. He was successful in fighting for a Green Jobs Corps in Oakland, California. This job corps would allow young workers to be trained in Green Jobs. Back in August 2009, Van Jones spoke at the National Clean Energy Summit in Las Vegas, Nevada. While at this summit, he has said that he believes that the clean energy uprising will change out economy the way it is today and create more opportunities for everyone. He said that he believes that the way we view “green” will soon change. Van Jones also agreed with Political Professor Melissa Lacewell when she suggested that Green is the new black and our country should view the “appropriations as green and not black, brown or even as the same old traditional civil rights issues”. Jones agreed that creating green jobs would stimulate the county’s economic issues and fix some of the problems in the more urban community.

Jones is dedicated to creating a greener country that he speaks when he can about the positive things about green energy and creating green jobs. He does also practice what he preaches, he does take public transportation that may include a train or a bus and when he travels he used hybrid cars. He seems to understand that not everyone shares his enthusiasm for these green jobs. The best way for people to trust in what he is saying is to do his job and show them.

Working With the Department of Labor

Part of Van Jones job description is to work with all agencies that are dedicated to providing and training of people for Green Jobs. One agency would be the Department of Labor. The United States Department of Labor has an Employment and Training Administration that has started a Training and Employment Notice. This notice provides information on the stimulus packages goal to keep and create jobs that promote the economic recovery with green jobs.

As we mentioned earlier there was $ 500 million dollars allocated to the Department of Labor’s Green Job Training. This grant from the government will be dispersed into 5 different ways. These are the State Labor Market Information Improvement Grants, Energy Training Partnership Grants, and Pathways out of Poverty Grants, State Sector Training Grants and the Green Capacity Building Grants. It would be the job of Van Jones to make sure that the money that was given to the Department of Labor would be used for in which the money or grants were intended to.

Since the Recovery Act was initiated and some funds were allocated, there has been some success in delegating the money for training in Green Jobs. This is where Van Jones¢ success in overseeing these training programs comes in. Van Jones has seen programs like Middle Class Task Force in Denver, Colorado. The Red Rock Community College as used funding from the Solar Innovation Grant, HVAC Programs, Renewable Energy Technology and Energy Efficient. Denver will be introducing their green job curriculum for electricians in the United States. They are just one of 70 training facilities that are being featured for the Green Jobs Open House
.

Van Jones has a tough job ahead of him. He has been an advocate for Equal Rights and has done a lot work within poverty stricken communities. His current job is to make sure that the Green Jobs that we need to make our country a better place have the proper funding. The stimulus package has been designed to help stimulate the economy and what better way to start then to make sure that the money is being used the way it was intended, especially when the jobs are on the line. There is a lot of hope riding on the stimulus package and on green energy itself. With the Council on Environmental Quality looking to help the middle class and the poverty-stricken communities, the $ 500 million dollars in funding should be going to the right place. Only time will tell, if Van Jones and the Council is doing a good job.