Installing a water hammer device has been turned into an easy task that almost anybody who can operate an adjustable wrench and channel lock pliers can do. If banging pipes whenever the water shuts off to a certain fixture annoys you, installing a water hammer arrestor may help. Water hammer is caused by the momentum of a column of water moving in a pipe coming to a sudden stop. 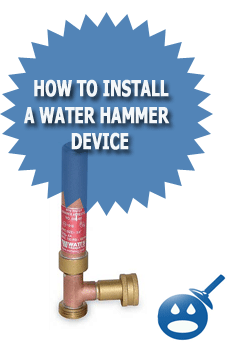 There are a few things you should check before installing a hammer arrestor for aggravating circumstances which if fixed would be a better cure. The higher than normal velocity of water in a pipe can be a contributing factor to water hammer. This higher velocity could be caused by high pressure. You should measure your water pressure with a gauge to see what you have for water pressure.

You can buy an inexpensive gauge that screws onto a hose bibb that can read the pressure such as the Watts # IWTG or, #276H300, which has a second hand which will record the highest pressure reached. I recommend leaving the gauge on for a 24-hour period to record the pressure then if the pressure has reached over 80-psi installing a pressure reducing valve to control the high pressure. Under sized pipes can also cause a high velocity flow, which can be a contributing factor to water hammer. If your pipes are too small you should have them replaced with larger pipes, which will stop the noise. 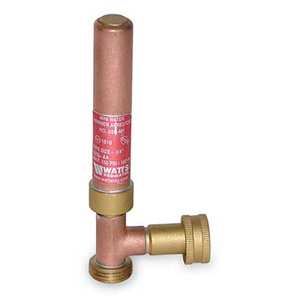 In the past when plumbers installed plumbing in a home they used to install a tee near every fixture with a capped piece of copper tube on the top of the tee. The assumption was that the tube would stay full of air to absorb the shock of water hammer at each fixture. We now know that these air chambers did not work for long with the air charge in the tube rapidly being absorbed into the water. Once the tube filled with water the cushioning action of the air chamber was gone, to recharge the air chambers the water system would have to be shut off, and drained allowing air to again enter the air chamber making it effective for another week or, two. Plumbers still use an air charge to cushion the effects of water hammer but today the wise plumber uses a hammer arrestor which is a manufactured device that has a piston sealing the water from the air charge. The captive air charge is not allowed to mix with the water, which gives the hammer arrestor a long service life before it finally wears out.

Fortunately for the homeowner “Do It Yourselfers” Sioux Chief Manufacturing makes a number of “Mini-Rester” water hammer arrestors, which are very easy to install requiring only the skill of being able to operate an adjustable wrench and in some cases a pair of channel lock pliers. Sioux Chief Manufacturing’s line of “Mini-Rester” has hammer arrestors that screw directly onto the stop valve for most water using fixtures and appliances. The “Mini-Rester” Sioux Chief part # 660-TR1B has a female 3/8” compression fitting on one side that can connect directly to the straight stop or, angle stop valve supplying water to fixtures and appliances such as sink faucets, toilets, and dishwashers. On the other side of the #660-TR1B “Mini-Rester” is a male compression connection to which the supply line to the faucet, toilet or, dishwasher can directly attach to.

It is recommended to also install a new supply line to the fixture or, appliance as well to prevent possible leaks that sometimes happen when compression connections are reused. Fortunately there are also pre-made braided stainless steel supply lines also available that work very well and are also very easy to install as well. I recommend avoiding the Watts FloodSafe product line as they have some problems with them.

For icemakers Sioux Chief Manufacturing has the #660-TC0B Mini-Rester, which has a compression fitting on each side allowing easy installation in the icemaker line to your refrigerator. Again the supply line should be replaced to prevent possible leaks from reusing a compression fitting and I would again recommend replacement with a braided stainless steel supply line avoiding the Watts FloodSafe product line. There are only a few places in your home such as tub and shower valves where advanced plumbing skills such as the ability to cut and rejoin various types of pipe are required. Sioux Chief Manufacturing makes “Mini-Resters” which are designed for connecting to copper, CPVC, and PEX in these applications.

These “Mini-Resters” are allowed to be installed inside walls without an access panel. If your plumbing skill level is high enough that you have the ability and tools to do the work then you can do it. But if this would be your first attempt at doing the work then you should consider using the services of a plumber to do this work. As you can now see there are a number of easy solutions that you the homeowner can do to take care of a water hammer problem.

« How To Remove Swimming Pool Calcium Deposits
Can I Use CPVC Cement on PVC? »