When the ground’s perk rate is low, a chamber septic system is often used. Soil that has a quick absorption rate can handle the standard, pipe and gravel septic system. But, clay and various other kinds of soil cannot handle this kind of system. When bedrock is near the ground, chambers are used.

A Look At The Chamber System: What Is It and How Does It Work?

What exactly is a chamber system? It’s installed similarly to a pipe and gravel combinations, only it uses chambers. Chambers can be created from either plastic or concrete. Chambers made with concrete are going to be more costly to have installed. Chambers created from plastic are shipped in parts and then reassembled in the field. Keep in mind that plastic is an extremely durable material and cheap, which is why it’s so much more popular than the chambers made with concrete. 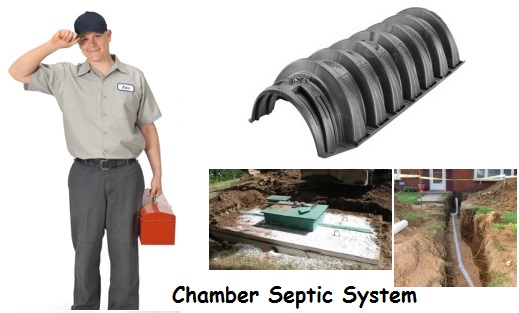 When there’s a need for a chamber system, there are generally quite a few chambers involved. They’re installed in leach fields, between pipe sections. When waste is released from the septic tank, it’s sent to the chambers. There, it amasses the waste, holding it for a period of time. Over time, the liquid is set free and absorbed into the earth. The chambers’ key role is to hinder the waste’s distribution rate.

When you build a chamber system, you can take full advantage of land that would not be usable with the standard gravel and pipe combinations. Thus, chamber systems are ideal. But, wait a minute… before you go settling on the system, you need to understand that the cost of this kind of entirely new design will take your breath away. Some systems have exceeded $10,000, which is a lot of money for bringing in this new architecture into your property. Of course, if you don’t have a choice, what can you do?

The design of the chamber system is rather simple. The liquid will exit the septic tank and go into the first chamber. As the septic tank releases additional liquid, it’s moved into the extra chambers downstream. The process goes on and on with chambers letting go a certain amount of liquid into the ground. With the process, bacterial action will take place and deal with the raw sewage.

Should a perforated-pipe layouts be used where the chamber system should have been, it could cause a flooded leach field and possible health risks. It’s also likely to generate nasty odors and shorten the septic field’s lifespan.

Chambers are placed between pipe sections in the drain field and covered by soil. No one can tell that those lines are in the ground because it all takes place under the ground. The downside to the chamber system though? It’s the expense!

A Look At Trench Systems: What Is It and How Does It Work?

The trench system is the cheaper form of special septic systems although it’s similar to the standard pipe and gravel bed layout structure. However, the key difference is the physical barrier. Bed systems are made up of drain pipes that are located in rock bed, which are all located under a large bed. However, trench fields, to work right, must be separated.

In a usual trench system, the trenches are set apart between one to five feet deep and have a width of one to five feet deep. In the trenches, perforated pipes are laid out on six-inch bed of crushed stone. The second stone layer is laid above the drain pipe, which is then covered by a barrier of some kind so that it’s protected from any backfilling process.

When the trench system is utilized, the outlet for liquid happens at the bottom of the excavation and both sides of the trench. It’s these factors that make the trench layout different from the standard bed structure. All drain pipes of the bed systems are in one big excavation with the bed’s bottom being the infiltrative system. Trench systems have both trench bottoms and sides, which are used for infiltrative surfaces and, for that, additional absorption is extremely possible. 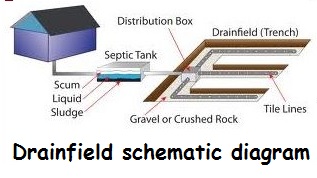 If there is a rapid or extremely slow percolation rate in soil, trench or bed system should not be used. For instance, if the soil allows one inch of liquid every minute, it’s too rapid for the standard absorption system. However, with a thick lining of an infiltrative surface, this can be dealt with. If it takes one hour to drain land, it’s too slow for a trench or bed system. Thus, a chamber system might be best.

Why Trench Systems Are Better Than Bed Systems

Due to the trench system’s design, more land is needed. And, this can be an issue for small building lots. Clearing land for the septic field is an added cost. Still, trench systems are seen to be a better option over bed systems… for a number of reasons.

1 – They provide nearly five times more sides so filtration can take place. It’s based on a bottom area trench system, similar to a bed system. The differences in the trenches are their separation and depth.

3 – When dealing with hilly land, the trench layout is best because they can dig following the land’s contour. This provides you with the most use of slopping ground. And, the infiltrative surfaces are maintained while you eliminate excessive excavation.

What are the advantages of a trench system?

Trenches can be placed between trees, which decrease the costs for clearing and keeps trees around for their shade and visual purposes. Bear in mind that the roots will still be a problem. The majority of folks agree that, if given a choice between a bed and trench system, a trench one works better. When you look at a trench system’s performance along with other benefits to the whole layout structure, you can see why so many people decide to go with it. While it is a little more expensive to dig separate trenches, its advantages could balance its costs.