A Basic Understanding Of The DWV System In Your Home

Solid wastes and wastewater removal is just as important as a home getting the water. What is sewage? It’s the mixture of organic solid waste and wastewater. DWV (Drain, Waste and Vent) is a system of pipes that work jointly to haul the sewage from the home.

The Basic Element Of A DWV System

A DWV’s most basic element is that it doesn’t work through pressurization but instead the force of gravity. In order for this to happen, there needs to be a constant air source within the system for waste to escape. Should there not be enough air in the drain pipes, they won’t properly or immediately flush out, which will cause the system to become clogged. 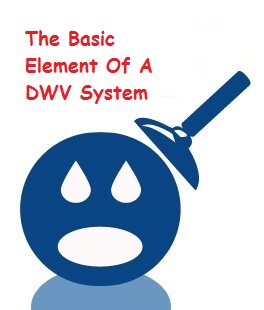 An example of this issue can be found in placing a straw in a glass of water. Take your thumb, placing it on one straw end. Pull it out of the water and what you’ll see is that most of the water won’t come out. The reason is because the air has become locked inside. Remove your thumb and the air flushes the water out of the straw because of gravity.

That’s how the DWV plumbing system works. When the ventilation lines are clogged, it causes the water in tubs, sinks and toilets to slowly drain out.

What’s The Construction Of An Ordinary DWV System

The average pipe diameter is between four and six inches. It’s this piping that comes into the home is down on the lowest level. Here, it bends and extends up through all levels of the home and out through the home’s roof. This piping length is called the main stack, which delivers a pathway for the sewage to leave the home. It’s also the key source of air for the DWV system. All the vent and drain lines return to the main stack.

Vent lines are about two inches in diameter and supplies the DWV system’s air. This kind of system must be vented so that the gases can escape, balance the air pressure and keep water from backing fixtures up into one another.

The DWV piping is also commonly made of PVC, cast iron or ABS but it can also be made of copper and galvanized iron. These are the primary lines and are enclosed within a home or the walls. It should also have a rating that’s equal to or surpasses Schedule 40.

Plumbing drain lines are not generally encased in the wall, usually thin metal or plastic material that can be assembled and disassembled easily to deal with clogs or be replaced. These materials are often known as thin wall piping and affixes to the Schedule 40 piping that’s inside the wall with slip joint adapters.

« My Seed Potatoes Don’t Grow – What’s the Next Course of Action?
Some “Do not” Tips on Clogged Kitchen Sink »