How To Change The Polaris PB4 Pump Seal 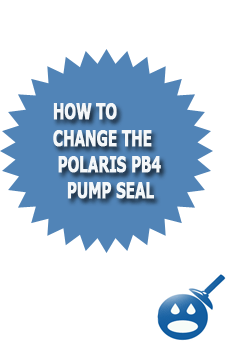 If your pump seal is leaking on your Polaris PB4 pump you will need a few tools to remove and then install the new seal. You are going to need a basic socket set or a set of open end wrenches, a flat head screw driver, some silicon and of course your going to need a new mechanical seal. The mechanical seal in the PB4 Booster Pump is made up of two different parts and is a bit more difficult to install then the average seal in lets say the Hayward Super Pump or the Pentair Pool Pump Series. The one thing you will have to watch for is when you go to install the new seal seat. Many people break the seal seat while they are installing it. The trick is to use a large deep socket that fits over the seal spring but meets up with the outer edge of the metal seal seat.

Disconnecting the power, removing the Polaris pump from the plumbing:

Before you can repair your Polaris PB4 motor you will have to shut the power off at the filter system, unplug the pigtail cord and then either loosen the 3/4″ PVC unions or diconnect the Polaris Booster Pump Quick disconnects by pushing them down and then pulling the Polaris pump feed hoses off of the Polaris Hose barb fittings. If you have your Polaris Pump hard piped with PVC and have unions in the plumbing, you can turn the union collars counter clockwise with a pair of channel locks, then the pump will be able to be removed from the swimming pool plumbing system.

Once you have the new seal installed you can start to reassemble the Polaris PB4 Booster pump. You will want to make sure your water sling is also good before you reattach the seal housing. Once you have the booster pump all back together you can then re-install it on to your swimming pool system.